When is the best time to visit the Cook Islands?

This is an almost impossible question to answer and I'm tempted to say anytime.
As a rule of thumb, you can expect the longest sunny days from October to March, but it can get a bit humid too as heavy showers are common particularly in the afternoon. It's also the cyclone season, so there's a small risk of more dramatic weather. June, July and August are cooler months but temperatures are typically still in the mid 20s C (upper 70s F) but it can feel chilly at night (but never cold). Aitutaki is 3 or 4 degrees C warmer than Rarotonga each month but has similar weather patterns. The further north you go, the hotter it gets. Average sea temperatures around Rarotonga range from 25C, 77F (Jun-Aug) to 28C, 82F (Jan- Feb). All I can suggest is you read the more detailed information below and decide for yourself 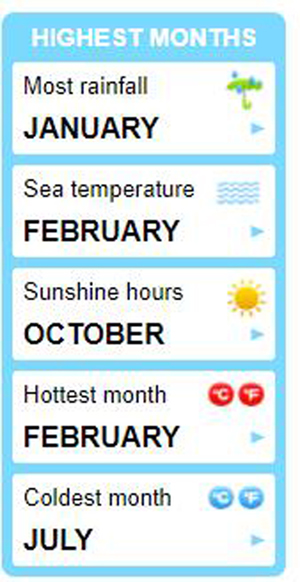 Cook Islands weather is typically tropical to sub-tropical with just two seasons...dry and wet. There's actually not much difference between the two. In the Northern Cooks Islands, temperatures are fairly constant throughout the year, while in the Southern Cooks (that inlcudes Rarotonga and Aitutaki) there is a difference of around 4°C between the warmer and cooler months. Mangaia in the south is the coolest island; Penrhyn and Rakahanga in the North are the hottest as they're closer to the equator (typically 5-7 degrees celcius warmer than Rarotonga

The wet season begins in late November and lasts until April or May, and sometimes longer in the Southern Cooks (that includes Rarotonga and Aitutaki). November to March is also the cyclone (hurricane) season. It can become hot and humid (29 degrees celcius/84 fahrenheit by day) with bright sunny mornings and late afternoon downpours around Rarotonga. As the heat accumulates over the Pacific Ocean during this season, depressions can form bringing with them thunderstorms, strong winds and the occasional tropical cyclone. According to the national newspaper, Cook Islands News: "on Rarotonga we judge how hot the weather is by checking how much the tar seal on the roads has melted!"

Water sports enthusiasts can get specialist reports about Aitutaki. Click the logo

Expect AITUTAKI to be several degrees celcius warmer each month. And the FURTHER NORTH you go, the warmer it gets. The most northerly islands have pretty much the same day and night time temperatures, usually in the low to mid-thirties celcius

The tables are courtesy of holiday-weather.com

Cyclones (elsewhere called hurricanes or typhoons) are a fact of life in this part of the world and are categorised as 1 to 5 where 5 is the most intense . The cyclone season in the Cooks runs from November to the end of April. There were some warnings during the 2021/22 season but it passed without a single cyclone reaching the Islands.

At worst cyclones can bring winds around 200kph (124mph), very stormy seas, flooding and extensive damage. But the extreme ones are relatively rare. A Canadian professor who studied their history says that between 1820 and 2006 they averaged less than one a season. And 29% per cent occur in February. The most recent serious one was Cyclone Pat which hit Aitutaki in 2010. And the worst cyclone season in living memory was in 2005 when five cyclones struck within five weeks. According to the Director of the local met office, the average is 1.1 a year

The after effects when 5 cyclones in 5 weeks hit the Cook Islands in 2006. Such events are very rare