The late American writer, Robert Dean Frisbie settled on Pukapuka in 1924 and immortalised the island in the books he wrote about it.   He said at the time he was looking for a place beyond the reach of "the faintest echo from the noisy clamour of the civilised world".  He found it, and to this day Pukapuka is one of the most untouched and secluded places in the Cook Islands.

The number of players is decided by the challenging team, but it's never less than 20 or more than 40.  The batsman - who doesn't wear shoes, let alone shin pads - doesn't run himself.  He has a bunch of younger islanders who do it for him.   Every time a batsman is out, not only are there chants of triumph but also some provocative macho dances, before he's replaced with a batsman from the opposing team.

Umpires use their whistle for any number of reasons (including just the sheer joy of being alive), and games continue for an indefinite number of days, before the winner is decided by a mysterious process that seems to be known only to participants.

One report of a 35 a side match says pseudo karate routines, obscene speeches, ridiculing and teasing are an essential part of a good game.  There's also a women only version!  And in both cases, the match is played for food...which the losing team have to fish for.

Culture and traditions like palm weaving (right) have remained unchanged for centuries.

And even with the arrival of an irregular air service, the island's unlikely to be overwhelmed with tourists.  The five hour flight from Rarotonga is scheduled to operate only once every six weeks or so, but it rarely does these days because of fuel shortages on the island.  The airport is about an hour's boat trip from the main settlement of Wale.

The entire population is said to be descended from just 14 people who survived a catastrophic storm and tidal waves (a tsunami) over 500 years ago, although the first human settlement is thought to date back to 1300 AD.

Not surprising then that it was previously called Danger Island - a name it was given  back in 1765 by English commodore, John Byrom who found himself unable to land because of the heavy seas pounding a large, submerged reef to the west.  The name still appears on some maps to this day.

The first European to sight it though was Spanish explorer, Alvaro de Mendana on 20 August, 1595 - St. Bernard's Day.   He named it San Bernando.


Pukapuka is one of the most remote places on earth.   It's closer to Samoa than it is to the capital island of Rarotonga which is 1,324 kms (823 miles) southeast.  It has its own language and customs and other Cook Islanders say its main asset is beautiful girls.   It's also the most densely populated part of the Cooks (appromimately 390 people per square kilometre).

The Island's name is usually said to derive from the puka tree (Hernandia nymphaeifolia)  which grows all over the place.  But Puka-Puka itself means 'land of little hills', and others say that's the real origin of the name which was given to the island by the first Polynesians who came here thousands of years ago.

CYCLONE PERCY
On the morning of February 25, 2005 Cyclone Percy hit the Island head on.    It was classified as a category 4 to 5 cyclone on an scale where 5 is the most severe, and was one of five cyclones in five weeks which swept through the Cook Islands.   At one stage, it was thought Pukapuka would have to be abandoned...but the locals are made of tougher stuff and decided to stay and rebuild.  Work took nearly six years.
Pictures and Special Report

When UK author and former comedienne, Pamela Stephenson visited in December, 2004 she found an island "very nicely set up with well organized community facilities".   In her book "Treasure Islands" (which I strongly recommend), she saw a school, hospital, coral sand tennis courts, garage, three churches and taro and sugar cane patches, as well as several stores.

Pukapukans are also keen on sport.  A large field known as the Niua Ya O Mataliki Stadium is the focal point for soccer, wrestling, relays, volleyball, tennis, cricket - or rather "kirikiti" (see below) - and discus throwing.  The island's three villages compete regularly against each other.

There are three islets on the huge triangular shaped reef - Ko to the south east, Frigate Bird to the southwest and the main islet of Wale ("wah-lay") to the north where there are three villages.  They're called Ngake, Loto and Yato  ("thar-toe") - or Windward, Central and Leeward.  The highest point is less than 5 metres (16.5 feet) above sea level.  The soil is infertile and coconut palms, pandanus, puraka  - a variety of taro tolerant of the environment - and a few breadfruit trees make up the main vegetation.  And mosquitos are a particular pest....although they're not malarial

The islanders have a passion for their own form of cricket called kirikiti.  It originated in Samoa.  Games are played with a long three-sided bat and a "ball" or "bowl" that can best be described as a solid block of wood.

IT'S JUST NOT CRICKET!

Find out what and where this is by reading...
An insight into daily life


Another of Frisbie's books to give an insight into the island in the 1920s is called 'The Island of Desire (The Story of a South Sea Trader)'.   But the title has a double meaning.  Desire was also the name of his very beautiful wife.

This never before published picture shows Frisbie with Desire on Tahiti in 1920 (it's signed and dated by Frisbie himself).   My thanks to Tony Probst from the USA who kindly shared it with me.  He found it inside Frisbie's own copy of another of his works, "The Book of Pukapuka" which itself has quite a story.  Frisbie later gave that copy to Tom Neale who spent 15 years living alone on another of the Cook Islands, Suwarrow.

'The Island of Desire'

English is rarely spoken, although most locals know some and children are taught it in the local school. It's estimated just over 2,000 people in Oceania speak Pukapukan.   If you want to impress, here are a few words:

A written form of the language does not exist, but a unique project is underway to translate the Bible into Pukapukan.  New Zealand scholar, Dr Mary Sailsbury and her husband, Kevin are working with the Pukapuka community to produce  what will be the very first work in the language.

IN THEIR OWN UNIQUE WORDS 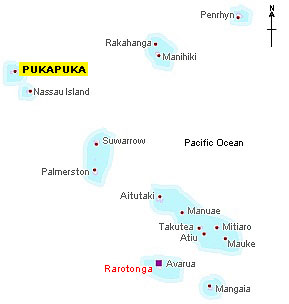 The puka tree close up, courtesy of the Cook Islands Biodiversity website

RULES, FINES AND PLENTY OF PARTYING

New year celebrations last almost to the end of February when  the Island Chiefs (Kau Wo Wolo) and the Island Council - pictured left -  hold their annual meeting to review the rules for governing the island in the coming year and the fines for breaking those rules.  The Chiefs then visit each village to share the rules and let islanders discuss and ask questions about them.  Caretakers or The Pules enforce the rules.


Each village then has a day long celebration (vananga) where the men of each village go to the other villages to share the rules, have a feed and dance with the women.  And that's followed by the annual imukai to celebrate and share food.
In 2012, Yato shared kaveu and birds, Ngake shared over three hundred fish and Loto shared fish and mawu (twice-baked imu taro mixed with coconut milk).

The cooking of the mawu took over three days.  The first day involved going to the taro patch and peeling and grating the taro.  The second day involved gathering coconuts on the motu and making all the fresh coconut cream.  The third day involved wrapping the mixture in banana leaves and baking it twice in the imu (underground oven).

Community and clinical psychologist, Dr Amelia Hokule'a Borofsky (left) grew up on Pukapuka and went back to the island to teach and write.  After another year away ("on the outside" as she puts it), she returned in 2014.   Writing in Cook Islands News, she said things were still mostly the same, but she noted that even this remote island is not immune to 21st century technology...

"Wale remains the same, just a few more cellular phones, more youth playing candy crush and using the flashlight from the mobile to catch kaveau or coconut crabs.  The roosters still crow every morning, the men have been playing toto, the game of throwing sticks every afternoon on the main sandy road, Ngake village is out at Motu Ko, and the kids splash in the lagoon as the sun sets over Yato point"

Some know it as 'Danger Island' because of an 8km submerged reef - Te Arai - and dangerous rip tides around it to the west.  The bones of dogs have been found dating back as far as 2130 BC

Living on Pukapuka is like being in a commune. The islanders practice traditional conservation which calls for entire villages to move from atoll to atoll for periods of time.  But this is not a nomadic existence...rather it's one with a focus on maintaining the delicate ecological balance.

The felling of trees is also prohibited without permission from village elders.   If a bird is killed out of season, or crabs or coconuts taken early, small but humiliating fines are imposed.   For more serious offences, the person is treated as a child until sincere remorse is shown.  The offender cannot speak at meetings and is given a child's food and wages.

A mama's memories and more
Reflections on life

From a report by Dr. Amelia Hokule'a Borofsky, who grew up on Pukapuka and Hawai'i, and has returned to the atoll to live.  Photo: Cook Islands News