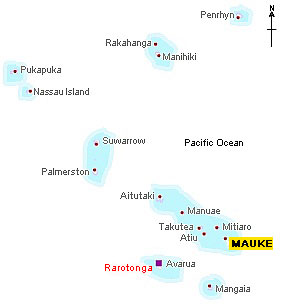 
According to legend, Chief Uke,  who was descended from the Gods, arrived at Mauke after a long voyage from Avaiki - the fatherland in the sky.  After a peaceful sleep he awoke and named it Akatokamanava - place where my heart rested.  He gave his beautiful daughter in marriage to Chief Atiu-Mua and their descendents populated Mauke and Atiu for many generations.

And it was those later generations who renamed the island Mauke ("Ma Uke" means Land of Uke).  The original name is still used in songs and on formal occasions.  Missionary, John Williams was the European discoverer of the island in June, 1823.


I so hope this is still there.  When I visited, this was the arrivals and departures (black)board at the airport.  Not just the flight details, but who's coming and going!

Mauke is about 45 minutes flying time from Rarotonga.   Air Rarotonga have flights on Monday and Friday, at 1330 and 1440.     The earlier (1330) flight goes on to Mitiaro before returning to Rarotonga.     And there always seem to be plenty of the island's youngsters around to greet the twice weekly flight.  Tourism is still in its infancy and accommodation is limited to rooms for just 40 visitors.

The most easterly of the Cook Islands, Mauke is half the size of Rarotonga in circumfrence (18 kms, 11.25 miles), but it's a world away in landscape and lifestyle.  Its central volcanic plateau is surrounded by a ring of jagged, razor-sharp fossilised coral or makatea which reaches up to 1,000 metres inland.  But the volcanic origins mean the soil is rich and this is justifiably called the garden of the islands.

The island is divided into four districts - Ngatiarua, Vaimutu, Areora and Makatea - two of which are split into their own sub-districts.  But walking or cycling around the island, you'd be hard pressed to work out where one ends and another begins.  Wherever you go though, you can expect great warmth and hospitality - 'ui tupuna' as islanders call it.

Stores are few and far between.  But when did you last see a department store that was in such a beautiful setting?  What's available depends on how recently the supply ship called in with its delivery

But Kamoe isn't worried.  And she's always got ice cold water and time for a friendly chat with passers by like me!  A truly lovely person typical of Maukeans.
Right: No designer brands here!

Hidden deep in the interior of the island is world's largest banyan tree.  It's thought to cover more than a quarter of an acre - some say a full acre - and it's still spreading.   A professor from Leeds University in England,  who's an expert on the trees, has seen it and he says its the biggest!

THE WHALE RIDER
High on the cliffs above Araiti Cove, legend says that the beautiful Kea watched while her husband, Paikea fished beyond the reef.  Paikea was a great fisherman, but one day as he was about to head for home, he was swept up in a hurricane which carried him out to sea.   He ended up alive on Mangaia, but Kea died on the rock. She was convinced her beloved husband was dead and she cried so much for him that she couldn't eat.  Maori legend talks of Paikea riding a whale to safety - as in the film "Whale Rider"  -  but Mauke legend doesn't mention this.  Kea's remains were uncovered in 2003 in the same spot where legend says she waited.  Her grave is another of Mauke's "hidden secrets" and a sacred site

GETTING THERE AND STAYING

The airport is a place of endless fascination and excitement for the islands' children.  They'll take a keen interest in your digital camera or smart phone, and are all smiles if you take their picture

Tiare Cottages are a popular place to stay.  The accommodation close to the ocecan is simple, but extremely clean.  And I can personally recommend them

The Strange Story of the Divided Church

Very free range!   Pigs, chickens and goats abound.   Islanders lavish much care and attention on them

Deep underground caves and lakes honeycomb the island.  Even the islanders haven't explored them all.  And a dip in the cool, crystal clear water is a treat.

Women go deep into the interior to gather young stems of maire which is a type of fern.  They have to navigate through the jagged makatea and avoid the wild pigs that inhabit it to reach the plant.

Then, with incredible skill and speed, they strip away the inner stem and weave the maire into leis.  These are often exported to Hawaii, where they sell for many times the few dollars the Maukeans get for their hard work.  The industry has been struggling for some time as fewer people want to do the hard work, but efforts are now being made to nurture seedlings and the hope is that they can be planted in gentler landscapes.

And the stunning Tiare Maori and ara (pandanus fruit) eis above right were specially created by  Mauke businessman, Taratoa Metuariki  for regional Prime Ministers and other VIPs attending the Pacific Islands Forum in Rarotonga in August, 2012

The centre of the island is dominated by a large white church with two separate concrete paths and two entrance archways. One is for the village of Ngatiarua and the other for the neighbouring village of Areroa. The two villages got together and agreed on the design and the builder, but the trouble began after the walls were completed

Neither could agree on the design of the interior, with the result that a wall was built across the middle of the church cutting it into two squares. Each village then completed its side to its own design. The pulpit, meanwhile, was placed against the middle wall and the seating.  And to this day it has has a clear line down the middle of its platform and the speaker is expected to have one foot on each side of the line!  But the warfare went on.  When one village worshipped, the other played loud games on the field outside.

Finally, a new pastor convinced the two villages that they should worship under one roof at the same time. The centre wall came down, but two distinct interior designs remained. One side was white, yellow and red, and the other, pink, yellow and white with white diagrams and circles

Sadly, this was all painted over in pale blue and white in the 1990s but amazing work has now restored the church to its former colourful glory.  Find out more and take a look inside at the stunning rainbow colours which adorn the church once more