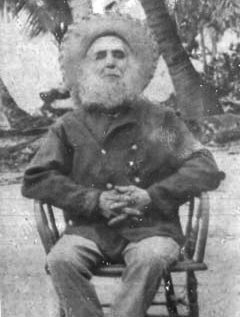 The Marsters family saga spans nearly 200 years. It begins in the Midlands of England although exactly where is not altogether clear, and it ends (or rather, still continues) on one of the most isolated islands in the world. Along the way, there are multiple wives, lots of children, a murder attempt and an ignominious death for the founding father of the unique community of Palmerston

The Early Years
From England to Penrhyn via California (?) and New Zealand

The commonly held view is that William Marsters was born Richard Masters (with no R in the middle of his surname) in 1831 (we don't know his exact date of birth, but he was baptised on 6 November of that year).

He was the second child of John Masters (1809-1880) and Ann Armstrong (1802-1873) who married in the ancient church of St. Mary deCastro near to Leicester Castle on 6 November, 1827. (Ann's surname appears in earlier parish records as Armston). His place of birth was the parish of Misterton in the Lutterworth district of Leicestershire. It also helps to explain why one of the islets in the Palmerston lagoon is called Leicester Bank

There's some debate among Palmerston islanders themselves about the accuracy of this. William Wyatt Gill of the London Missionary Society writes of a visit to Palmerston in 1877 in which he says Marsters told him he was a Birmingham man. And there are at least two late 19th century newspaper reports of encounters with Marsters by passing ships which say he told their crews he came from Birmingham. A report in 'The Press' of 1935 has Marster's son, William the second telling reporter RK Palmer his father was born in Birmingham but brought up in Leicestershire. And he also says his father kept "spasmodic communication" with his UK relatives until his death. That would also explain why some dates, based on in the oral history of Palmerston do not add up

Author's note: Information about the Leicestershire origins is based on English parish records. (no birth certificates exist as this was before a law was passed in England and Wales making registration compulsory). Missionary Gill's letter referring to the Birmingham origin is from the archives of the London Missionary Society. The newspaper reports are in the National Library of Australia and the National Library of New Zealand 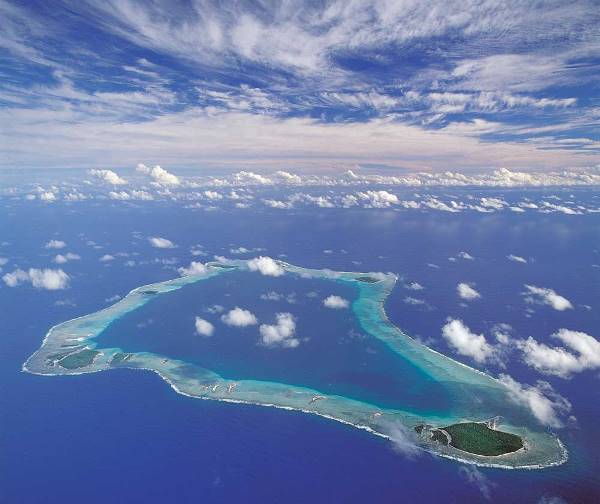 Palmerston from the air

Much has been written about William's wives on Palmerston (see below), but if you believe in his Leicestershire origins, he was already married when he arrived on the island. On 10 November, 1851, at the age of 20, he married in Misterton 18 year old Charlotte Farmer from the nearby hamlet of Walcote (spelled Walcot at the time). They had two children, Richard (or John Richard according to census records) who was born about January, 1852, and Anne Elizabeth who was born on 5th December, 1853. The records which confirm this mean also that Charlotte was heavily pregnant at the time of her marriage. (Ann Elizabeth's birth certificate pictured below also reveals that Charlotte was illiterate...instead of signing the certificate, she marks it with an 'x in column 7')

It's debatable whether William committed polygamy when he married his Palmerston wives. No one owned the island at the time, so it was not subject to the law of any country. That said, he married the first of those wives in Tahiti which was under British rule at the time and bigamy has been a crime under UK law since the 17th century.

Seduced by sea songs and stories

Great great grand-daughter, Yolande Browne (descended from William and his first wife and now herself, sadly deceased) told me William was accompanied by three other boys when he left. He subsequently earned a living on the whaling ships which frequented the Bay of Islands in New Zealand. But around 1859, he left his vessel and after what one report describes as "various ups and downs", he reached Tahiti.

Sea stories and songs of the sea attracted him to the life, according to his descendants. One such sea song is still sung today on Palmerston...

"Blow the winds I O
To the Logan I will go
To live no more on England shore. And let the music play
I'm off for the morning train
To cross the railway road
I am a rose to me own true love
Ten thousand miles away"

​   Author's note: The song is particularly fascinating with its mention of the railway. Leicestershire was one of the first places in the world to have one. Logan is probably a reference to John William 'Paddy' Logan who was co-founder of one of the most important civil engineering firms of the age, Logan and Hemingway. with icon

In a 1998 letter from Palmerston, the Rev. Bill Marsters says William heard the sea songs and stories from seamen who gathered every evening at the "Red Lion Fish Market". Locals tell me a pub by that name was demolished in 1970 to make way for houses which are now on Franks Lane. But the local history society say records dating from 1835 show the only pub in the village at that time was the Bull's Head; the nearest Red Lion was in Gilmorton. Maureen Hilyard researched this further for her self-published book about Marsters (Marsters of Walcote) and she was told a fish market was probably held in the centre of the village

The California connection...or lack of it 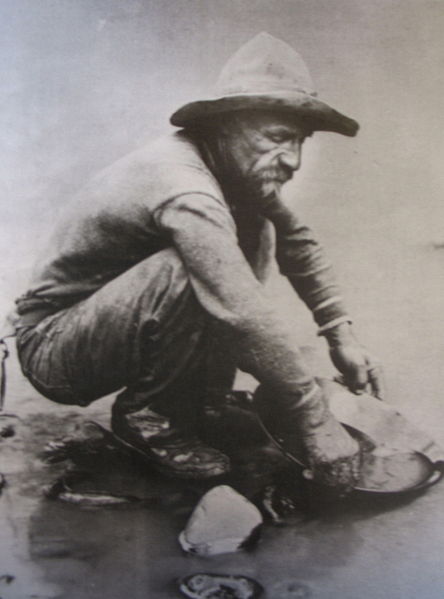 According to the Marsters family, William worked alongside men like this one panning for a possible fortune in the California gold rush. The Rev. Bill Marsters, in a letter of 1998, says the patriarch "came away with a find of three jars or jimmy-johns of gold nuggets".

If that's true, it's not clear why he ended up destitute after returning to sea. Several documents say he jumped ship at at Penrhyn (also known as Tongareva) in the Northern Cook Islands. Another account from 1888, however, has Marsters himself telling visitors from a passing vessel that he ran away from the British barque, 'Rifleman' in Tahiti. The dates don't add up either...even if William fled England as soon as he knew his wife was pregnant with their second child, he wouldn't have reached California in time for the gold rush because that ended in 1852. Another theory is that he joined the Alaska gold rush which began in 1850 with a further discovery in 1861

How and why he ended up on Palmerston is a story that has been confused for generations. But while there's still debate about Marsters origins, the facts about his later life are now clear, thanks to documents in the UK's National Archives, including one in William's own handwriting

FOUNDING A DYNASTY
From Penrhyn to Palmerston via Manuae

The content of the pages headed "Marsters of Palmerston" are the product of original research by the website author and all rights are reserved and all sources acknowledged. If you wish to use this material in academic research, the suggested citation is "John Roberts, author of www.cookislands. org.uk". Please contact the author about use for any other purpose including reuse of any of the pictures. Sources acknowledged here

MORE OF THE MARSTERS SAGA