ABOUT SUWARROW
Suwarrow was described in 1890 by Mrs Robert Louis Stevenson as "the most romantic island in the world". It wasn't the inspiration for her husband's famous book (that was published seven years earlier), but the atoll is a real life Treasure Island. And to this day, some of that treasure has never been found.  Two men at different times also lived alone on the island, one of them making it his home for 15 years 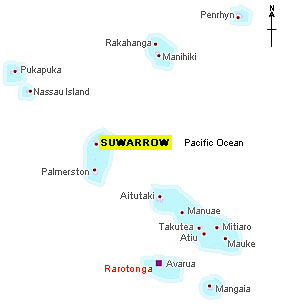 Suwarrow  was declared a National Heritage Park in 1978. The island itself, its reef and a six kilometre area around it are totally protected under Cook Islands law. Yachts require special permission BEFORE visiting the island.  Millions of sea birds make their homes there

TAKING CARE OF THE TREASURES

In the mid 19th century, a ship from Tahiti was carrying out salvage work on Suwarrow's reef when its captain unearthed an old iron chest near the shore on Anchorage Island (one of the islands in the lagoon). It contained gold and silver coins valued at the time at US$22,000 (about US$5 million today).

And in 1876, a New Zealander, Henry Mair discovered gold and silver necklaces, brooches and coins in a rusty box which a turtle uncovered while laying its eggs! He had no means of carrying it away, so hastily reburied it and carefully noted its position. But Mair was clubbed to death by natives in the New Hebrides in 1891 and his written record of its location was never found. Today though, as a Narional Heritage Park, Suwarrow is a treasure island in another way.... 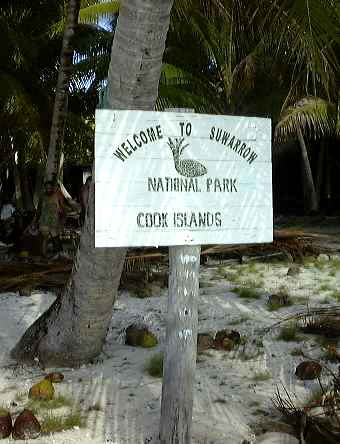 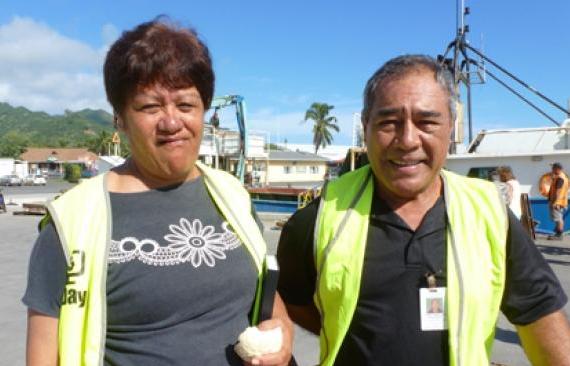 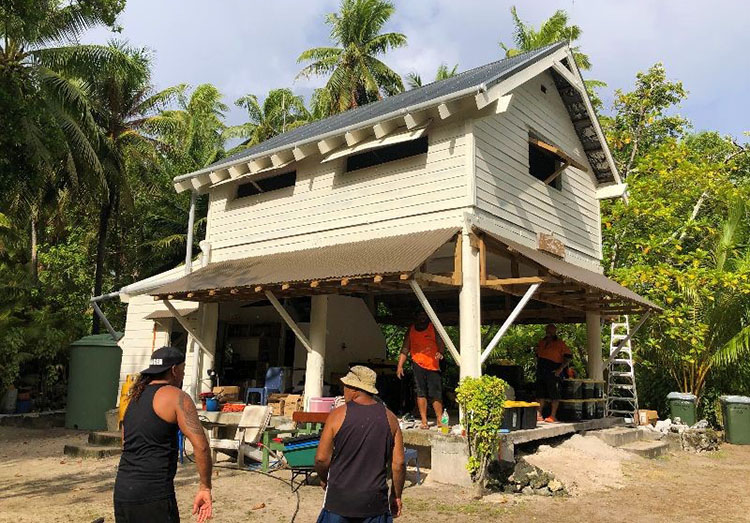 Island caretakers like Manihiki couple, Harry and Vaine Papa'i are chosen by the Cook Islands government every five years. They're responsible for protecting and managing the environment and wildlife of the island  They also act as customs, immigration and biosecurity officers for visiting yachties who help pay for them by way a fee of NZ$50 to anchor in the lagoon. Their home doubles up as the island's cyclone shelter which has recently been renovated. But the caretakers will never be lonely...they share the island with an estimated one million seabirds!.
Photos: Cook Islands News

THE HERMIT OF SUWARROW

Tom Neale was a sailor who dreamed of living alone on a tropical island. He read about Suwarrow in a book and when his ship stopped there in 1945 it was love at first sight. He finally received Government permission in 1952 to live there and in October that year became a modern Robinson Crusoe (albeit minus a Man Friday).

For 15 of the next 25 years he lived alone on the island, tending his garden and chickens, catching fish and coconut crabs. In 1966, a friend helped him publish his story, "An Island to Oneself". It's a fascinating, and at times, incredibly moving story, particularly when Tom is bed bound and on the verge of death only to be rescued by the first boat to call at the island for more than a year.

This "hermit of Suwarrow" stayed on his dream island until 1977 when stomach cancer forced a return to Rarotonga. Tom died that year at the age of 75 and is buried in the RSA Cemetery on Rarotonga

"I chose to live in the Pacific islands because life there moves at the sort of pace which you feel God must have had in mind originally when He made the sun to keep us warm and provided the fruits of the earth for the taking.."

From Tom Neale's Book "An Island to Oneself"

The London lad who followed in Tom's footsteps 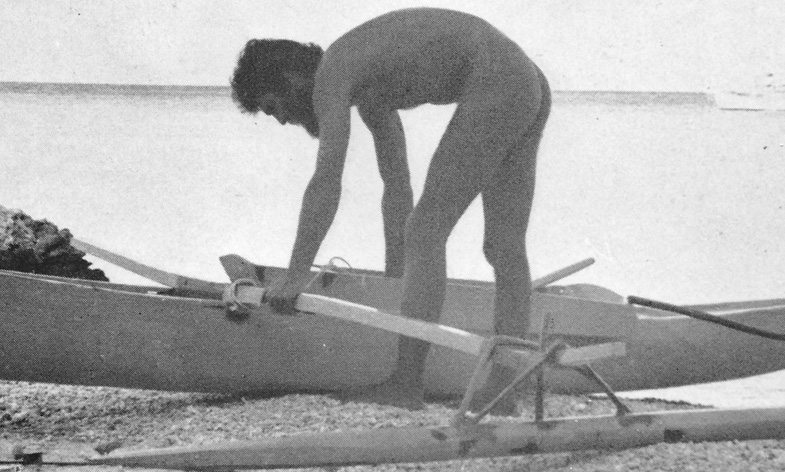 Few people know that Tom Neale was not the only person to live alone on Suwarrow. In the summer of 1965, a 23 year old former art student from London, Michael Swift began nearly a year of life as a hermit on the remote island.   He persuaded New Zealand brothers, John and David Glennie to put him ashore with his possessions after joining the crew of their trimaran, 'Highlight' at Tahiti in July, 1965. He spent the first two months living mostly on uto which is the nutritous kernal of the mature coconut because he didn't know what else was safe to eat. ​His home was the hut formerly occupied by Tom Neale. 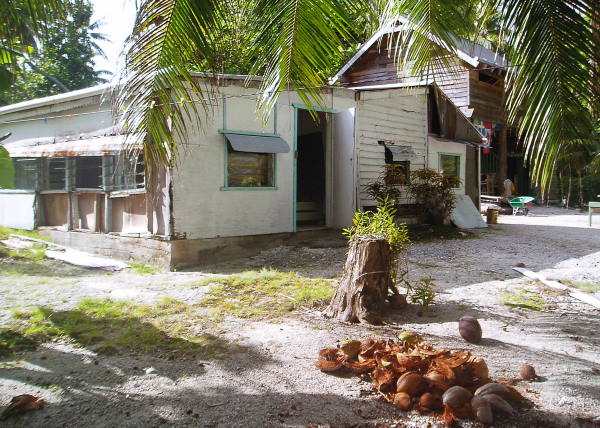 But Swift was an illegal immigrant according to the Cook Islands government because he had no permission to stay on the island. On 2nd December, 1965, John Tariau - then MP for Pukapuka - sailed into Suwarrow lagoon on a mission to tell him so.

Swift told him he'd found peace and contentment on the island and under no circumstances was he returning to Europe. He signed an indemnity paper absolving the government of any responsiblitity to send a vessel to take him off the atoll, and before being left alone again he was presented with supplies and given tips on survival.

He turned up in Rarotonga in April, 1966 and left a few days later for New Zealand. He said he intended to return to Suwarrow, but when he learned in 1970 that Neale was back on the atoll, he went to live on Aitutaki instead. He's reported to have said that Suwarrow wasn't big enough for both of them!

Summary of Michael Swift's stay on Suwarrow - from "Sisters in the Sun" by A.S. Helm and W.H. Percival (published by Robert Hale & Company, 1973). The information itself is derived from contemporary reports in 'Pacific Islands Monthly'. Photo of Michael Swift by Dr Koekoe Mokotupu

Abundance on land and sea

As well as a million seabirds, Suwarrow and its reef is home to thousands of huge coconut crabs.  Daniel Paul from Seattle, Washington state, USA kindly provided me with a lot of the pictures including one of him with  one of the "locals" - a coconut crab he helped catch at Seven Isles, several miles from Anchorage Island . Hundreds of sharks and rare species of turtles are among the abundant sealife in the waters around the atoll

Daniel Paul from Seattle, Washington state, USA  took these photos and kindly let me share them with you.  He's pictured with island caretakers at the time of his visit, John and Veronica Samuelson and one of the "locals" - a coconut crab. He helped catch it at Seven Isles, several miles from Anchorage Island

Pink sand, a natural hot pool and  an ocean of surprises are just a few more of the treasures of Suwarrow