ABOUT RAKAHANGA
Up to date information about Rakahanga is almost non-existent, because it's very rarely visited by outsiders. There's even doubt about who discovered it in the first place. Some say it was the Portuguese navigator, Ferdinand Magellan in 1521, but academic research hasn't been able to confirm this. What is known though is that the island could disappear off the map forever. Like its nearest neighbour, Manihiki 42 kms south, it's so low lying - just 4.2 metres (13.7 feet) above sea level at its highest point - that it will get washed away if global warming causes sea levels to rise even a little". 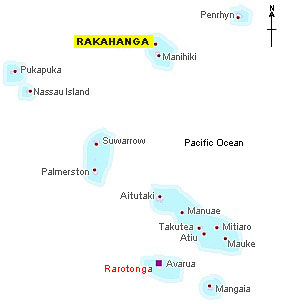 The only way to reach Rakahanga is via neighbouring Manihiki and hoping one of the islanders there will be visiting on a tiny inter-island boat. It's definitely not a journey for the faint hearted as seas can be difficult and the boat really is small

Tourism is non-existent.  Journalist, Rachel Reeves paid a fleeting visit in 2015 and called it "a community that showers you with love and kindness". Here's how she described Rakahanga: "This atoll ....has one crushed-coral road. It winds through fishponds and taro swamps; pigpens and palm trees; colourful houses with pareu for doors; a cemetery in the forest with tombs big as houses; dense thickets you can get lost in and white-sand beaches you can have all to yourself"

You can read her full report here

"If there are places left where a man can grow old contentedly, it is on some such quiet, drowsy atoll, where today is forever and tomorrow never comes; where men live and die, feast and sorrow, while the wind and the waves play over the wet sands and gleaming reefs"

Australian author, Julian Hillas (aka Dashwood) lived on Rakahanga during the 1940s. From his book, 'South Seas Paradise' 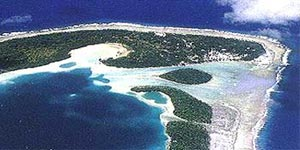 Rakahanga is traditionally called Tapuahua. There are two main islands and seven motus or islets in its lagoon. On the east these are: Akaro, Motu Ngangle, Huananul, Motu Mahuta and Motu Okakara. On the southwest side the islet of Te Kainga ("the home") guards the widest passage in to the lagoon. It's also the original dwelling place of the first residents.
Aerial pictures courtesy of Ewan Smith, Air Rarotonga 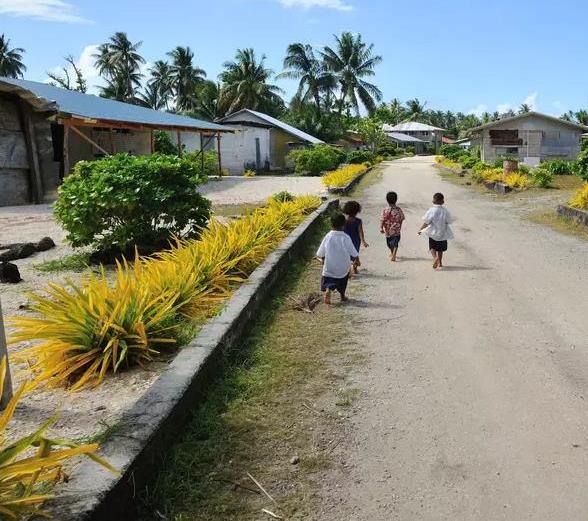 The island is heavily reliant on imported supplies such as food, fuel and building materials, but cargo ships visit only two or three times a year. The main source of drinking water is rain water. Each household has some water storage capacity and there are also community water tanks. There is a hospital in Rakahanga with a nurse practitioner and also a public health office. The environment is largely untouched and is generally in a pristine state. The island is covered with thick lush coconut trees
Summary of extracts from a report by the Cook Islands National Environmental Service

A fresh new look...
but an uncertain outlook

Rakahanga was given a bright new look at the beginning of 2012. Dilapidated roofs were replaced with new ones made from different coloured steel and new water tanks have been installed. The school principal, Tuhe Pio said:

"The island's looking really beautiful. Now you stand back and instead of seeing rusty roofs you see a brand new village. People just look at their homes and feel very proud because they're nice."

But the transformation may have come too late. In recent years, the population of this remote island almost halved... results from the 2011 census showed that the number of residents was down from 141 in 2006 to just 77. The latest census shows a tiny increase to 83

A SNAPSHOT OF ISLAND LIFE

American author, Elliot Smith is one of a few outsiders to have written at length* about a visit to Rakahanga. Although that was back in 1994, little if anything has changed. He said the little settlement of Matara (also called Nivano) has a tiny wharf and boat landing. The CICC church, primary school, a couple of shops and some government offices sit among well-made houses in what he calls "this sleepy town". Tiny huts are erected over graves in the cemeteries, as is the custom on the island. And possessions of the deceased are placed in them to help them in the world beyond. Smith says the locals are more reserved than the neighbouring Manihikians, but most "warm up quickly".
*"Cook Islands Companion", 2nd edition, Copyright 1994 Elliot Smith. Pacific Publishing Co. Albany, California

A coarse dry taro called puraka or swamp taro is enjoyed by locals, but considered bland and starchy by foreigners. One European who lived on Rakahanga passed on his favourite recipe which is reproduced in the "Cook Islands Companion" mentioned above

"Cut up the puraka into small chunks about the size of a thumb. Put them in a pot of boiling water, along with a coral rock about as big as your hand, and cover the pot. Cook it all for three hours, adding some salt and pepper every hour or so. When the three hours are done, drain away the water, throw away the puraka and eat the rock. It will still have more flavour than the puraka!"

DISCOVER RAKAHANGA THROUGH THE EYES OF A RARE VISITOR

READ ALL ABOUT IT