An insight into daily life

This account of daily life on remote Palmerston was written by Sandra Paterson, a former New Zealand Herald journalist who lives on Rarotonga. She spent five weeks helping at the local school in 2009. Sandra also taught news writing skills to the older pupils. It's a fascinating, thoughtful and rare insight into a very small isolated community 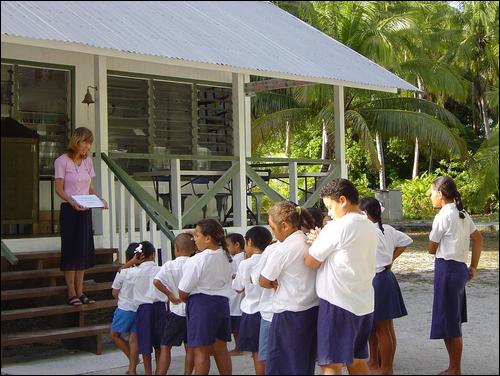 Beneath both the Cook Islands flag and the Union Jack, the 14-strong administration team gathers for devotions, all dressed alike in a smart blue uniform. They then file out to their respective jobs for the day: anything from running the generator to planting cabbages.

The pathways through the island’s tall mahogany trees are carefully swept, lined with coconut logs and dotted with lamps. Hammering noise comes from the south where a house is being built. More are planned: Palmerston is the only outer island where the population is rising. Every home has an income, many salaries have doubled in the last couple of years, and church attendance has mushroomed 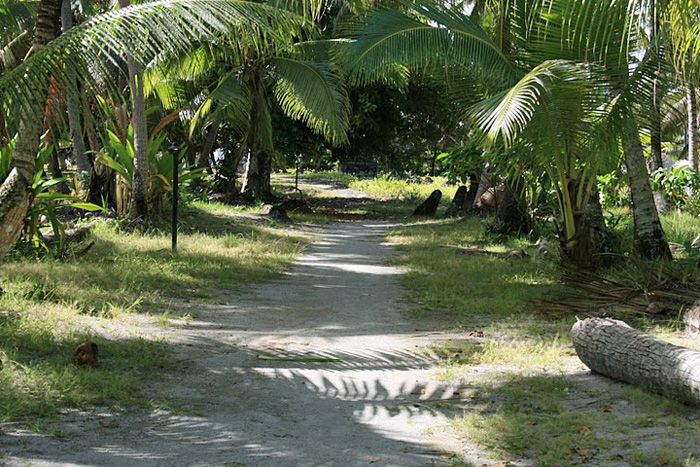 "Innovative and hard working"
Deputy Prime Minister Sir Terepai Maoate visited the stunningly pretty atoll two years ago and was impressed by more than just the scenery. He described the islanders as innovative and hard-working, and said he was “very pleased” with the administration.

“Palmerston is unique - and there is good evidence of all sectors working well together to achieve the best for the island.”

Much of the progress stems from the way the administration team now functions. Several years ago, if your job was looking after the generator, then that was all you did. Arrive at work, turn it on, go home again. And this is how it still works on many of the outer islands. But today on Palmerston, everyone working for the administration is expected to be multi-skilled and to put in a full day’s work wherever required. The person turning on the generator might then go lay concrete. The nurse might don a hard-hat and help unload cargo. And everyone is responsible for keeping a section of pathway swept and spotless

Everyone is expected to be multi-skilled. Goodly Marsters counts customs man among his roles

Simon Marsters and his grandchildren. Palmerston is the only island in the Cooks where the population is growing thanks to the way the administration runs things

"IT'S ALL ABOUT PRIDE...AND DOING POSITIVE THINGS" 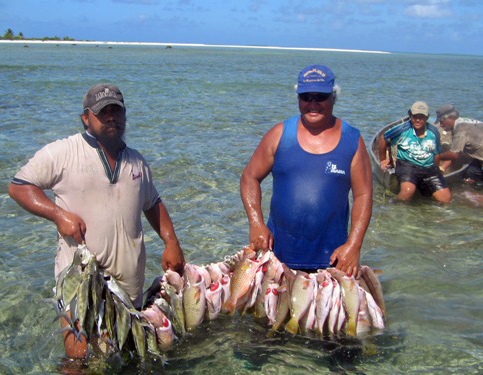 Tere Marsters, island secretary since 2003, says the changes were not popular at first, but that people are increasingly appreciative of the work being accomplished. “It’s about pride. We’re doing positive things for the community - and people can see that.” A long list of projects has been ticked off, including buying an excavator and a loader, installing air conditioning in the school, building a multi-purpose hall and a mission house, and sending 95 per cent of the staff away for further training in everything from early childhood education to carpentry. And all assets belonging to the administration - tools or machinery - are kept in a new, centralised workshop.

24 HOUR HEALTH CARE ON A SCOOTER!

The decline in population was halted mainly by a deliberate emphasis on health and education. “We knew that’s what families would be looking at. So to draw them back, we needed to improve the school and the health system.” The administration team upgraded the health clinic, and began to take seriously its task of supporting the island’s one nurse - making sure medical supplies were kept well-stocked, and giving her a hand-held radio and a scooter. She is now on duty 24 hours a day, seven days a week, and “just her presence and her availability has made a big difference 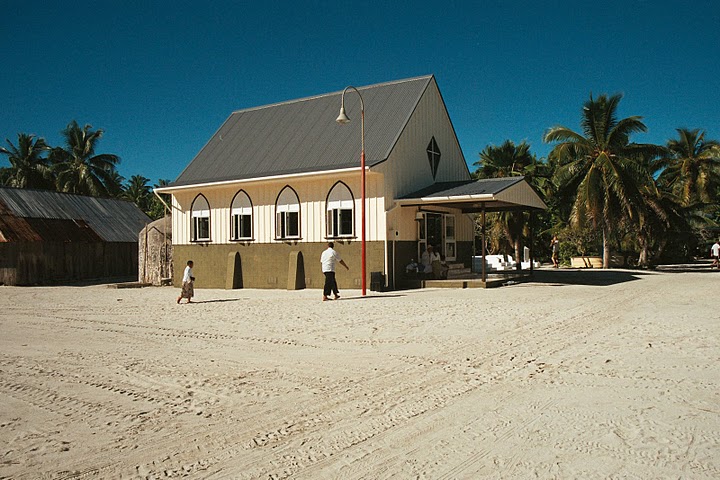 “When we started to look at big changes on the island, we knew the church had to play a proactive role. The church promotes peace and harmony, it gathers people together, it meets their spiritual needs. I remember when there were only a handful of us at the early service. Now there is life in the church.”

WORKING TOGETHER FOR CHANGE

It has not been an easy road making so many changes. Palmerston’s extreme isolation makes any project more difficult. Government expectations sometimes impinge on local customs and traditions, and, as with anywhere, new ideas often face initial opposition. But the reality of life on the tiny atoll is now a far cry from its lingering reputation as a backward and dying community, where the residents have nothing to do but quarrel.

People are working together. Not so long ago, when a cargo ship arrived, everyone would get their own stuff off. Now, they take whatever cargo comes off first, no matter whose it is. We still have our ups and downs, like any family, but the overall atmosphere is good.”

"SOMEONE FROM PALMERSTON COULD LEAD THE COUNTRY"

Back in the classroom at Palmerston Lucky School, a 10-year-old boy is looking pleased with himself. He’s just won the trophy for displaying the ‘virtue of the week’ - being thorough. The principal - and sole qualified teacher - likes to reward the children to keep them motivated, and every week she hands out certificates or small prizes for good work or behaviour. She also encourages the children to dream big. “Someone from Palmerston could lead the country,” she tells them frequently. “One of you could be the Prime Minister one day!” And somehow, looking around at what the tiny island has been able to achieve, it seems quite possible.