The legacy of William Marsters lives on not only in his descendants, but also in the way they speak. Journalists, academics, writers and casual visitors to Palmerston have remarked down the years about the distinctive dialect of the islanders which harks back to the founding father's origins in England. It's been described as "an old Midlands drawl". William told crew on a number of passing ships that he was a Birmingham man, although it's commonly believed he was born in Leicestershire. According to linquistics experts, the accent most closely resembles that of Gloucestershire - a county further south west. But they also say that, despite the incredible isolation of the island, the accent is gradually fading away through contact with the wider world and other "outside influences", including video recorders, DVDs and the internet!

I'm a journalist, not a linguistics expert and many of those who've written about the accent are similarly not experts, but their observations are, in my view, still worth sharing.

This is the main street today in the sleepy little English parish of Misterton with Walcot in Leicestershire - commonly believed to be the birthplace of Richard Masters as he was known then (no "r" in the name). And it's thought the accent of this area and the towns and villages around it that William (as he became) took with him to Palmerston. But others, including Marsters himself, say he was Birmingham man and the accent is from that area. The city is about 59 kms (37 miles) from Misterton 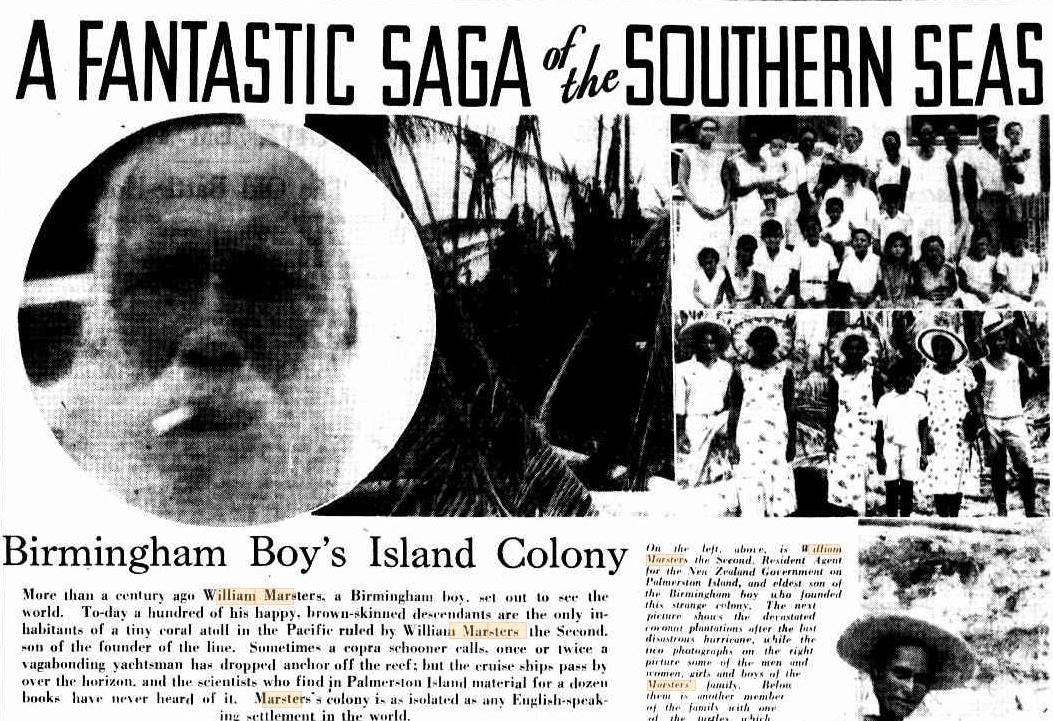 The Sydney, Australia newspaper, The Sun published a story in May, 1935 about a meeting between its reporter RK Palmer and William Marsters the second. And Palmer places the accent firmly in the Midlands of England, and Marster's origins to Birmingham not Leicestershire. He recalls the way William's son spoke:

"Stay and hawd the bawt, lads," he commanded. That accent was the authentic Warwickshire of a century ago. William the First and his townsmen used it, but to-day it Is spoken only on Palmerston Island, where it has survived through generations of mating with Polynesians.

"Reminiscent of the South West!

The first mention I've found about the unique accent is by Ralph Stock in his book 'The Cruise of the Dream Ship' first published in December, 1921 and it's a brief one. Remarking on the islanders, he says: "They read, write and speak English, this last with an accent vaguely reminiscent of the south-west of England".

American author, Robert Dean Frisbie spent much of his life in the South Pacific and writes about Palmerson in his 1944 book, 'The Island of Desire'. Referring to Takataka, a crewman on his friend's boat, he says

"He speaks the curious provincial English that was brought to Palmerston originally by William Marsters..."

And he gives this example:

"Yas," Takataka, will say, "I smokes cigarettes; also I chaws tobaccer." And: "I tromped to my lond and I clombed a tree". 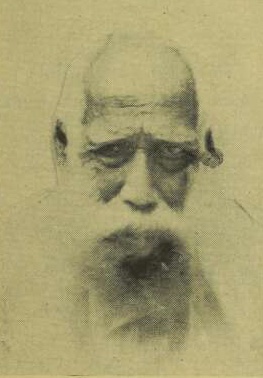 "A notable feature of the Marsters clan is their quaint, old Midlands English speech. It is spoken with a slow drawl, and is quite difficult to follow at first acquaintance."

ARCHAIC WITH A "DASH OF THE HIGH SEAS"

Dr Tom Davis, in his 1955 book "Doctor to the Islands" ( Published by Michael Joseph, London) said he was delighted to find the people of Palmerston "spoke a language of their own". He said "everyone by the name of Marsters spoke archaic seafaring English with an added dash of the South Seas". He gave this example:     * 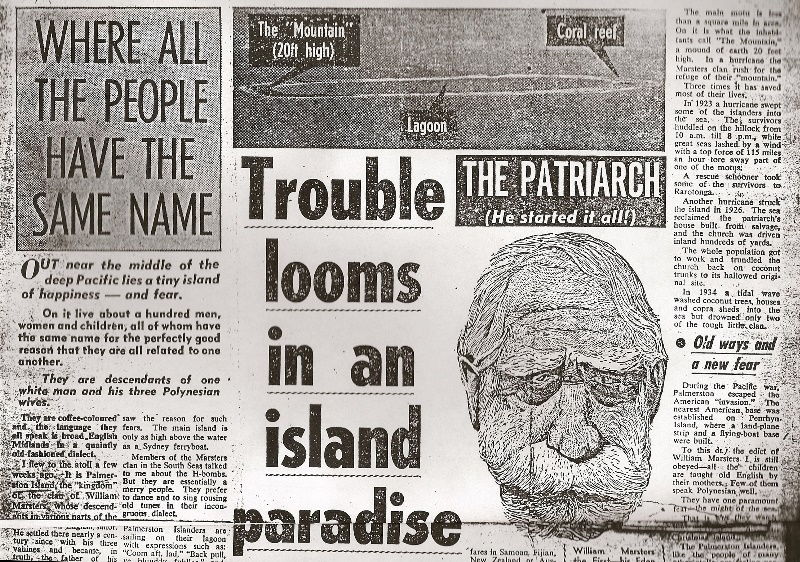 Australian journalist, Jack Percival visited Palmerston in 1956 to talk to islanders about atomic testing in the South Pacific. "The language they all speak, " he wrote, "is broad English Midlands with a quaintly old fashioned dialect". And he attributed that to founding father, William. "Marsters established his own school and insisted from the start that every child must learn English. That is why the dark skinned descendants now speak old Midlands with a slow drawl". He also remarked on some 'colourful' language that harked back to the seafaring origins of their ancestor...expressions like "Coom aft lad" and "B----- the sharks! Into the bluudy sea with them".

English missionary, Bernard Thorogood worked in the Islands in the 1950s and recalls his surprise at hearing English spoken by the Palmerston islanders. In his book "Not Quite Paradise" (London Missionary Society, 1960), he says "everyday speech is a queer brand of English, spattered with archaisms". Although he doesn't speculate about the type of accent, one particular example he gives includes a phrase that he describes as broad English West country. Older folk, recalling some of the terrifying hurricanes of the past tell him:

"When the seas came roaring across the islet, the cry was 'Oop the marntain', and up the mountain they all went." 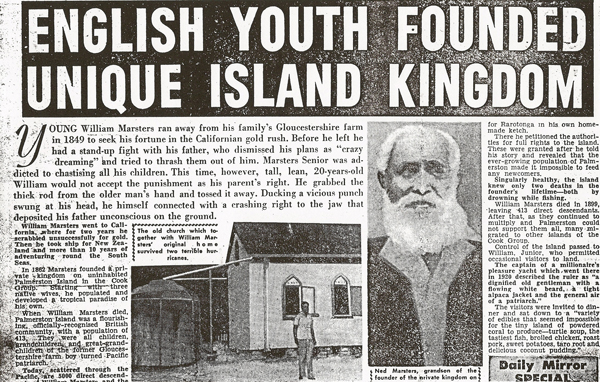 A special feature in the UK's "Daily Mirror" newspaper in 1959 told the William Marsters story. Within it, we learn: "to this day, all Marsters speak with a quaint, old fashioned vocabulary and a distinctive Gloucestershire accent".

Meanwhile, a study paper proposal from the University of Victoria, British Colombia of 1982 explains that "the modern population speaks with an old English (Gloucestershire) accent. Due to the isolation, the Palmerston dialect contains many words that have long been out of use elsewhere".

WHAT DO THE EXPERTS SAY?

A unique atlas of languages* includes the definitive study of Palmerston English. One of the world's leading linquistics experts, Sabine Ehrrhart- Kneher visited the island in 1992 and noted: "The Palmerston people are proud to speak 'the most British English' of the Cook Islands and they try to limit the number of Maori words in everyday life, especially if there is an English equivalent....A great number of English origin are either historical or dialectal remnants of the first William's speech..."

She describes traditional Palmerston English as having "a very special chanting melody" with characteristics of the accent of Gloucestershire in England. But she also notes that it has evolved over the generations due to increased contacts with Rarotonga English, New Zealand English...and due to the videos that are watched almost every night in all the houses!

In 2015, linguistics expert Dr Rachel Hendery of Australia also noted changes over the preceding 20 years in the language because of outside influences and contact with New Zealand. Her analysis supports a view that Marsters came from the Midlands of England - "probably Leicestershire or Birmingham".**