A WINDOW ON THE UNIVERSE

"What could be more tempting than watching the pure beauty of the starry sky and shooting stars on the edge of a sandy beach with coconut palms behind you?"
I can proudly introduce the rest of the world to just how amazing the starry sky is here above the Cooks and just how close you can feel to the Universe"

Those are the words of astrophysicist, photographer and journalist, Petr Horálek from the Czech Republic waxing lyrical about the beauty of the night skies over the Cook Islands. And I know what he means. The very first time I visited the Islands, I walked along the beach on a Bible-black night and was left speechless by the star-studded beauty of the heavens above. Unlike me though, Petr has been able to capture that beauty in some truly stunning photographs which he's kindly allowed me share on this site. These are the Islands as never seen before....what Petr calls "a window on the universe" 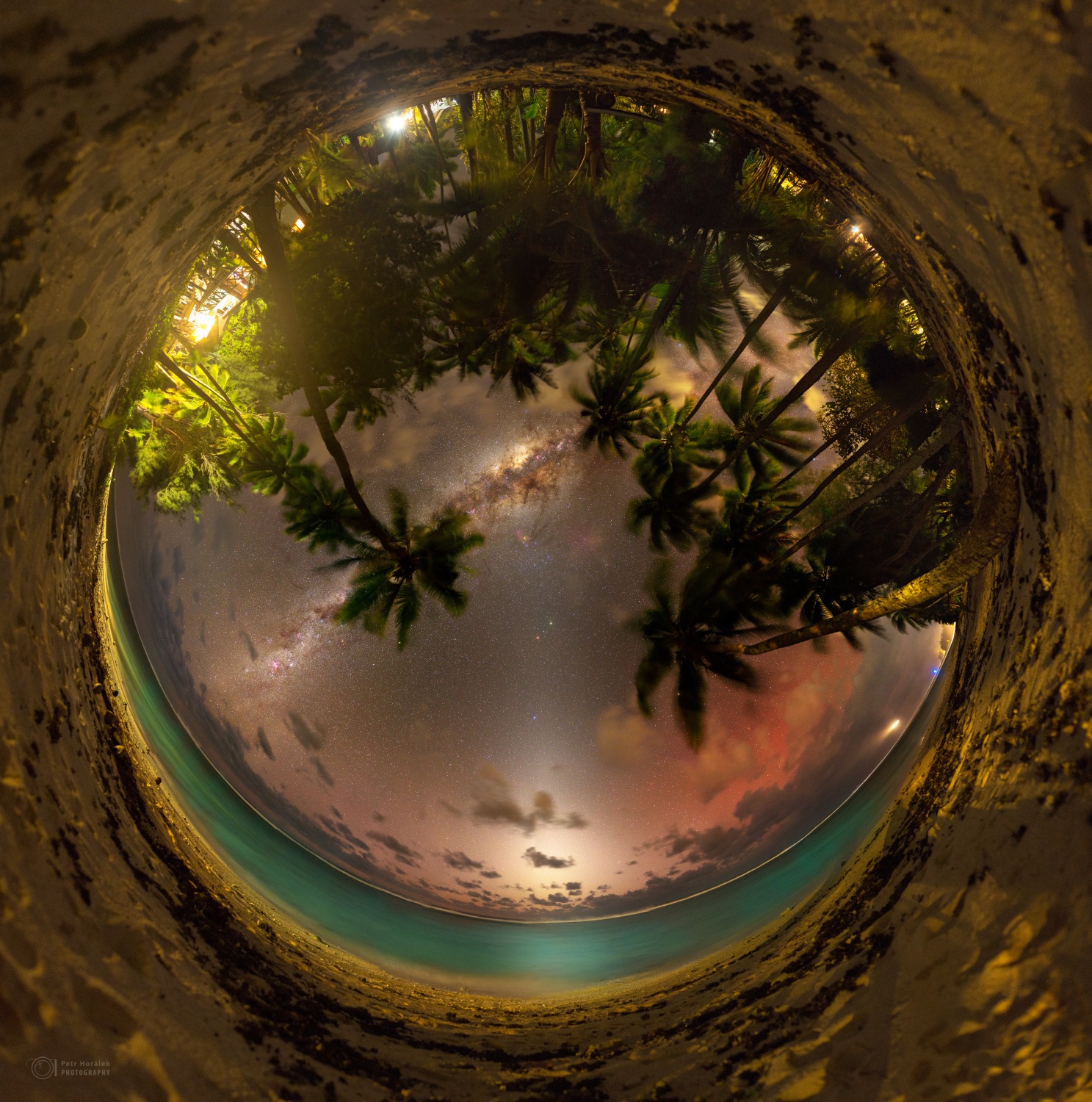 Petr fell in love with the Islands on his first visit in 2010 to see a total eclipse of the sun. But he had to wait (and save like mad) to return four years later. On 18 August, 2014 he hastily set up his camera and tripod on the beach on Rarotonga and ended up with this breathtaking picture, with the Milky Way almost centre of the shot

"Probably the most amazing part of my first night was seeking so-called zodiacal light. In most of the world, zodiacal light is invisible or is a very faint and strange light column sticking out of the western horizon just less than an hour after sunset, continuing up to zenith, almost as if someone far out on the ocean is holding up a very powerful torch.
It is likely that no one on the Cooks knows just how unique this is to witness. This light comes from dust particles spread around our solar system level, as the residual material from forming our Sun and planets 5 billion years ago" 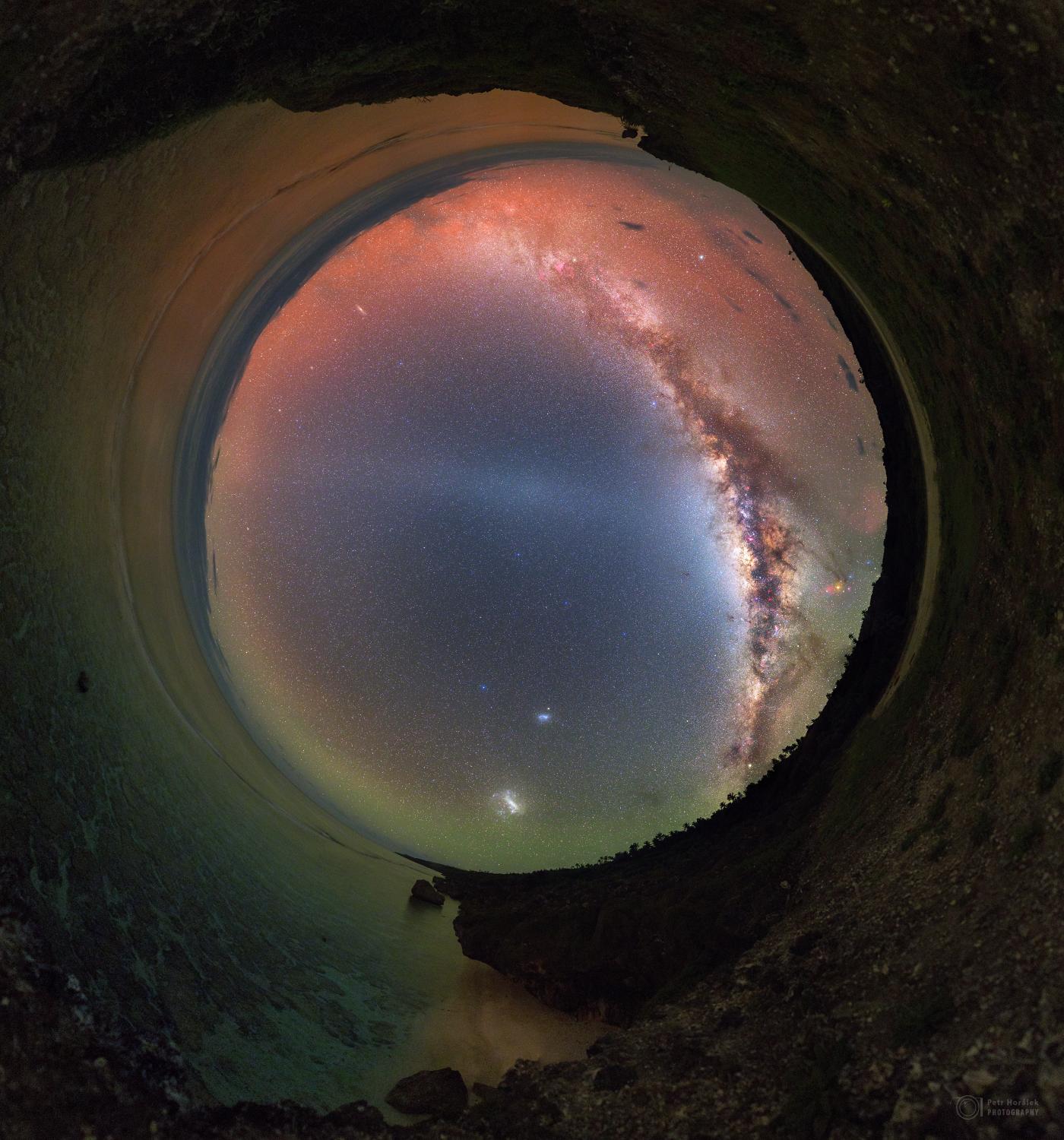 On what Petr describes a beautiful night later that August, he and his camera were on Mangaia and he captured this panorama in a highly skilful way. This is his description of what you can see in the picture

"This unusual all sky panorama is a composition of 53 singular images. It shows the Milky Way with many dark and colorful nebulae in its level, zodiacal bridge across the sky on left-right direction, two dwarf galaxies well known as Magellanic clouds on the bottom of sky view, two very faint galaxies on the left-up and reddish or green horizon caused by fluorescence of upper Earth’s atmosphere.
I witnessed shooting stars from the descending activity of Perseid meteor shower, incredibly bright zodiacal light and zodiacal bridge across the sky and Milky Way with countless dark nebulae - dusty clouds in the level of our Galaxy splitting the Milky Way in two halves...Mangaia is a window to the Universe " 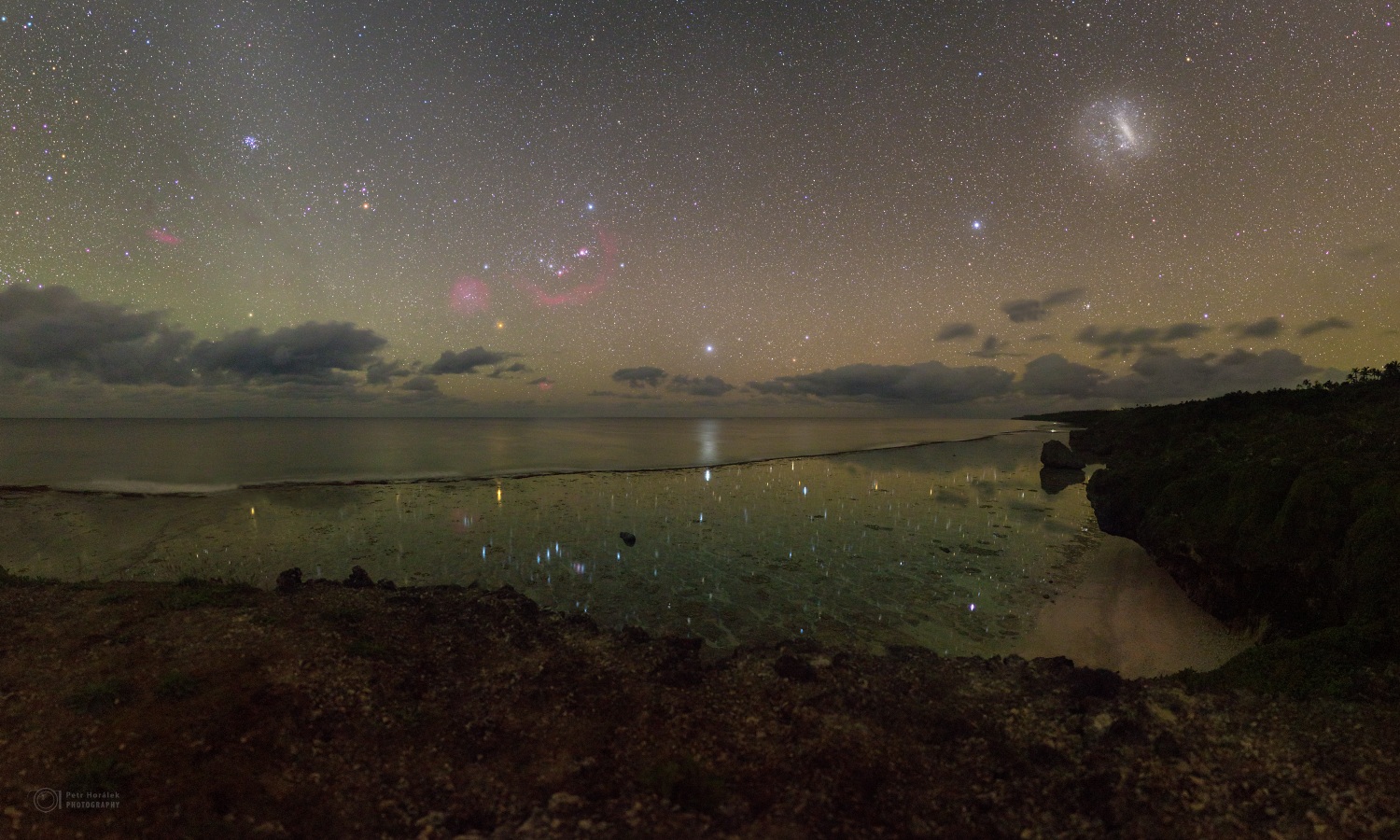 Also taken on Mangaia...I'll leave Petr to explain what you can see and how he got this amazing shot...

"On the right-up is Large Magellanic cloud, one of the dwarf galaxies called by Maori language Nga mau. In the middle is the brightest star of the night sky - Sirius. Just on left from the star is lying Orion with its colorful nebulae, unfortunately not visible to the naked eyes. On the top-left are Pleiades, more known like Matariki. Image is panorama from 16 singular images"

MEET THE MAN BEHIND THE CAMERA

Petr Horálek is a graduate of theoretical physics and astrophysics and works at the Observatory Úpice in the Czech Republic. But his passion is photography.

During his 2014 trip, Petr visited Aitutaki, Rarotonga and Mangaia and took lots of photos, of which these are just the first to be published. More are promised, but some will take him years of post processing.

And it's not just the Cook Islands night skies that he's captured on film...have a browse round his website and discover some of his other work

Petr also thinks the Cook Islands has the opportunity to open a whole new area of tourism:

"It’s kind of a shame there’s not yet an attraction for visitors wanting to watch stars in the Cooks, lectures or basics astronomical courses, such as night sky photography. Just a small telescope and a place far from main resorts would offer such an amazing experience to visitors and residents alike, no matter their interests. In addition to the cultural and natural wealth of this paradise, night sky gazing would definitely have its place among unique Cooks attractions"

COPYRIGHT NOTICE: The photographs on this page are Petr's copyright, and reproduced with his permission. Please respect that ownership and do not reproduce them in any form without asking Petr first. You can contact him at this address: horalek.petr(at)seznam.cz