Oldest island in the Pacific

Geologists estimate that Mangaia is at least 18 million years old, making it the oldest island in the Pacific. It's the second largest of the Cook Islands and the furthest south. The present day name was given by Aitutakian, Tamaeu who came to the island two years before Captain Cook and called it Mangaia-Nui-Neneva; that is "Mangaia monstrously great". Cook sighted the island on morning of 29 March, 1777. And there's some evidence, albeit inconclusive, that the 'Bounty' mutineers also called at Mangaia.
The island rises 4,750 metres (15,600 feet) above the ocean floor, and has a central volcanic plateau. Like many of the southern islands in the Cooks, it's surrounded by cliffs of fossilised coral, called the makatea, in this case 60 metres (200 feet) high 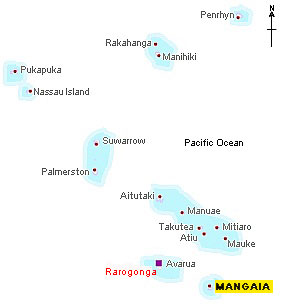 Internal airline, Air Rarotonga operates flights to and from Rarotonga on Monday, Wednesday and Friday. The trip takes about 40 minutes. And as the plane goes straight back, you need to stay at least one night on the island...assuming you want to see more than just the airstrip!

Mangaia is not a beautiful island in the usual sense, but it is an island of great beauty. The landscape is incredibly rugged, many roads are rough and rubble-strewn, but everywhere there's greenery and life. And what makes it most special are the people. Mangaians have a fierce sense of independence, great pride in their island and show incredible warmth to visitors. Sandy beaches are few, but the only footprints are likely to be yours, as tourism is still in its infancy. And although residents are fiercely proud of their home, many still call themselves British!

Tamarua in the south is one of three villages on the island. Oneroa on the west coast is home to about half the population and the main village. The other  is Ivirua in the north east

Outside the island school...a reminder to students about the rewards of hard work. It says: "The Maori can achieve anything the Papaa can but to do this he must Work! Work! Work!" (A papa'a is a foreigner)

Pigs and chickens seem to be everywhere and are the freest of free-range. The pigs have a particular liking for coconuts and mangos...and their meat takes on these flavours 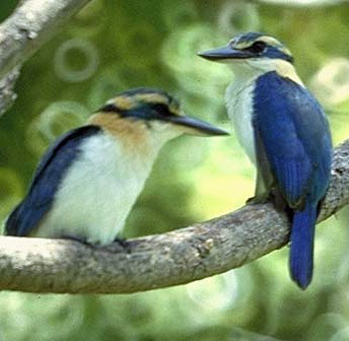 THE RARE BIRD WITH AN IDENTITY CRISIS?
The Mangaia Kingfisher (Todiramphus ruficollaris) is found nowhere else in the world, and it's name is totally misleading. It never eats fish! Like its distant cousin, the Australian kookaburra, it preys instead on skinks, insects and spiders. The colourful bird lives high up in the forest growing on the makatea. Birdlife International says there are between 400 and 700 birds on the island, but because they're unique to Mangaia, they're classified as an endangered species
Photo: Cook Islands Biodiversity Database, Gerald McCormack

SMALL BUT PERFECTLY FORMED
Mangaia is renowned for its shell neckbands or "eis". These are are made from the shells of the tiny yellow snail, the pupu, which emerges only after rain. Gathering, piercing and stringing is a very time consuming business. The women of the island often give the highly prized strands away as gifts of friendship to visitors from other islands in the Group. But they are also much in demand in Tahiti and Hawaii 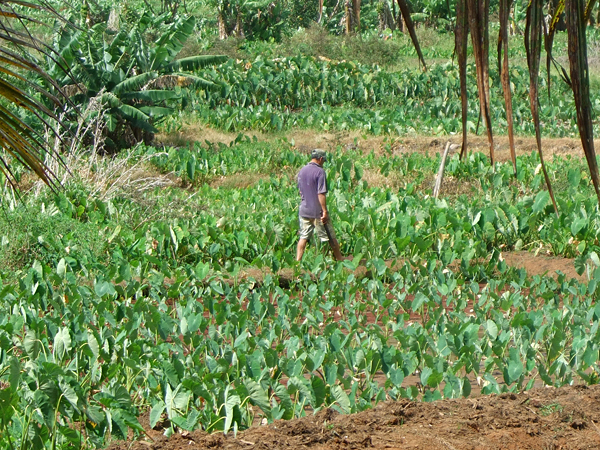 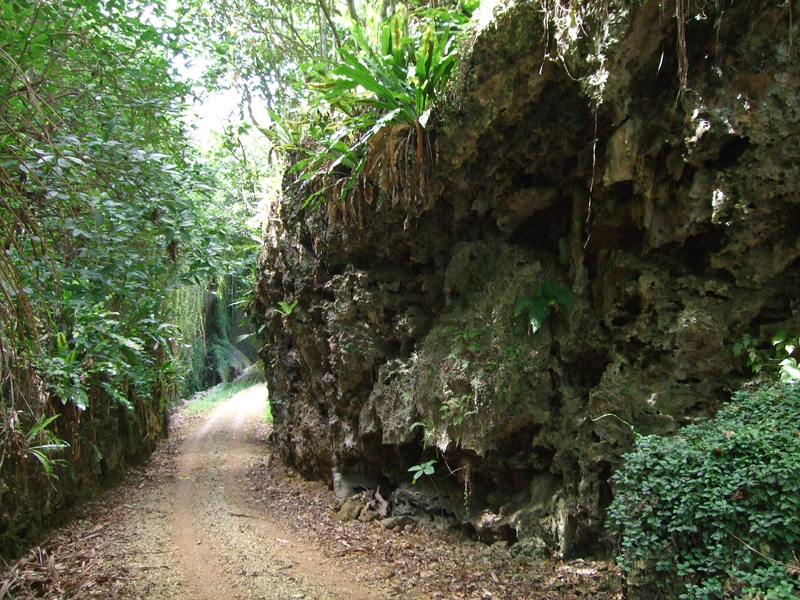 THE TROPICAL POTATO
Taro is sometimes called the "potato of the tropics" and the finest is said to grow on Mangaia. For those who are interested, it's high in vitamins A and C, has only a trace of fat and is particularly good for anyone with digestive problems or food allergies. As you can see from the photo, lush taro plantations and other vegetation thrive in the centre of the island at the bottom of the makatea, and in the central valley. But, much as I love the Islands, I have to say taro is an acquired taste!

SYDNEY HARBOUR BRIDGE OF MANGAIA
The road in the picture is near Tava'enga village and it was blasted through the makatea in 1951 using war surplus explosives. It was an amazing engineering feat. Before it, bulky goods were carried on horseback up a series of steps. Ewan Smith, MD of Air Rarotonga compares it in his coffee table book, 'The Cook Islands' to Sydney Harbour Bridge for the way it transformed travel on the island.  I'm no engineer, but I found it completely mind-blowing

Lake Tiriara in the south of the Island is an area teeming with plant and animal life. It opens into a cave in the makatea, but it's been at risk for years because of poor agricultural practices and a lack of proper management. Thanks to a not-for-profit environmental organisation, it now has not only the protection it needs, but viewing platforms and a boardwalk round the perimeter

In return for the work which has been done, the islanders have promised to protect the lake by banning pesticides, dumping, tethering of livestock and construction of any building within 50 metres of the shoreline. The investment has been made by Seacology, whose sole purpose is preserving the highly endangered biodiversity of islands throughout the world. I'm grateful for their permission to use the photographs showing the lake and one of the viewing platforms.

Sandy beaches are few and far between. Below ground though, there's a whole different world to explore. Mangaia is honeycombed with amazing caves like the one pictured centre with its owner, Teremanuia Taukakuma. And inside, there are stunning natural rock formations.

"BRITISH AND PROUD OF IT"

British vistors are given a particularly warm welcome on Mangaia...because islanders still think of themselves as British! I was told that this patriotism dates back to Queen Victoria's day when King John of Mangaia (pictured right, standing) paid Her Majesty a visit in London.

After his audience at Buckingham Palace he was careful to walk backwards and so continue facing the Queen. Victoria was so impressed at his courtesy that she presented him with a Union Flag with her picture on it, and told him that Mangaia would from that day forward forever be part of Great Britain. I'm told the flag still exists, albeit in two pieces! Half is supposed to be in the the home of the current queen of Mangaia, and the other half in Tonga. 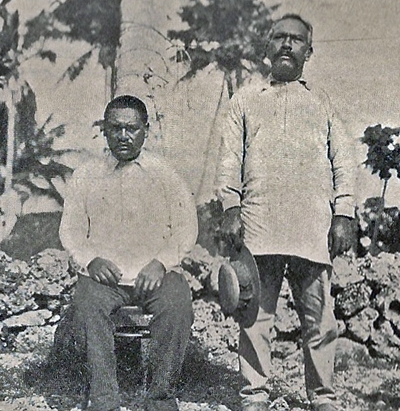